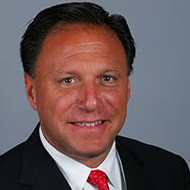 Chris Monasch most recently served as Interim Director of Athletics at East Stroudsburg University of Pennsylvania.

He was previously Director of Athletics at St. John’s University in Queens, N.Y. for 10 years and has also served as Commissioner of the America East Conference and Northeast Conference.

Monasch graduated from St. John’s in 1981 with a bachelor’s degree in Athletic Administration, and Fordham in 1983 with a Master’s degree in Communications. He holds a Juris Doctorate from Seton Hall, which was conferred in 1993. He is a member of the New Jersey and Pennsylvania Bar Associations.

Monasch has also served as an adjunct professor in sports law at Seton Hall, and in sport management at St. John’s.

Monasch has held several positions on NCAA committees, including spots on the national organization’s Leadership Council and Management Council.